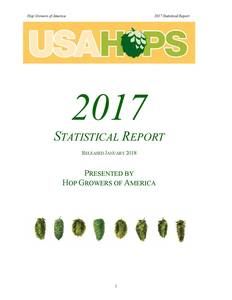 HOP GROWERS OF AMERICA RELEASES ANNUAL STAT PACK
Data and opinions of industry leaders indicate the U.S. has hit a saturation point with hop production coming in at 104 million pounds for the Pacific Northwest – a new record.

YAKIMA, WA – February 6, 2018 – The annual Statistical Report from Hop Growers of America has been released, revealing data compiled on 2017 harvest for all U.S. acres. Data focuses on the three main Pacific Northwest producing states – Washington, Oregon, and Idaho – and 26 additional states outside of the PNW (approximately 2% of the U.S. production).

Notable findings of the data include:

While global hop demand appears to be on the rise thanks to burgeoning international craft beer cultures, many industry leaders cautioned against additional acreage being added in the U.S. for the 2018 crop. All key indicators suggest current aroma hop demand has largely been satisfied by the unprecedented expansion of U.S. acreage in recent years.

Conversely, many reports also indicate current global alpha inventories are insufficient for market demands as the global brewing industry has finally worked through decade-long surpluses, which had perpetually depressed the alpha market since 2009. However, the alpha deficit is expected to be satisfied in the near term with the impending transition of certain excess aroma acres back to alpha in the U.S. as well as the recent additions of significant alpha acreage in Germany of the Herkules variety.

Industry leaders also encouraged brewers to continue contracting for forecasted hop needs but advised to do so cautiously and pragmatically given the unpredictability of craft consumer demand and the recent slow down of craft volume growth.

The Stat Pack consists of data from USDA-NASS, HGA, the International Hop Growers Convention, and other industry and government sources. To view the 2017 Stat Pack, visit: usahops.org/enthusiasts/stats.html.

Hop Growers of America (HGA) promotes American-grown hops to brewers and industry both domestically and internationally. HGA facilitates conversations between growers, merchants, and brewers, providing statistical reports to the industry and education on the quality, variety, and tradition of U.S. grown hops. For more information, visit: www.usahops.org/